INTERNATIONAL CONFERENCE
ON PHYSICS IN MEDICINE

Dr. Ahmad has co-authored 169 peer-reviewed papers in international journals, 65 conference papers/book chapters and 403 conference abstracts. He supervised directly 10 M.S. and 5 Ph.D. students and was a supervisory Committee member for additional 5 Ph.D. and 29 M.S. students. He has been a member of the Editorial Board for several journals, a reviewer for more than a dozen journals and an American Board of Radiology Medical Physics examiner. Dr. Ahmad became a Fellow of ACMP (FACMP), a Fellow of AAPM (FAAPM), a Fellow of ACR (FACR) and an IAEA expert on Radiotherapy Physics. He was a Raja Kali Narayan Scholar (KNS) of Dhaka University. 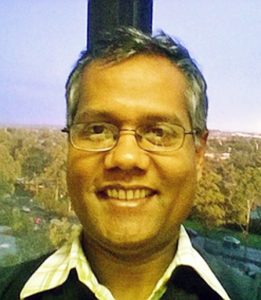 Dr Pradip Deb obtained BSc Honours and MSc in Physics from the University of Chittagong, MAppSc in Medical Physics from Queensland University of Technology, and PhD in Nuclear Physics from the University of Melbourne. He was a Melbourne University Research Scholarship recepient. After doing postdoctoral research at the University of Melbourne and the Ohio State University, Dr Deb accepted a Lecturer in Health Physics position in the University of Tasmania in 2007. Dr Deb joined RMIT university in 2008. Currently he is a Senior Lecturer in Medical Radiations, Program Coordinator of BAppSc Program, Research Supervisor and Radiation Safety Officer in the School of Health and Biomedical Sciences at RMIT University, Melbourne, Australia. He was the Australian Institute of Physics Bragg Gold Medal Finalist in 2002. He is the recipient of many academic awards including Student Choice Teaching Award in 2015, Teaching Excellence in Higher Education Award in 2016, Teaching Impact Award in 2017, and SHBS Team Award in 2018. He is a member of the American Physical Society (APS), American Association of Physicists in Medicine (AAPM), American Association of Physics Teachers (AAPT), Australian Institute of Physics (AIP), Australasian College of Physical Scientists & Engineers in Medicine (ACPSEM), and Australasian Radiation Protection Society (ARPS). He teaches medical radiations, radiobiology, radiography and nuclear medicine physics. His research interest includes radiation dosimetry, and radiation safety and protecction. He has supervised 10 PhD students.